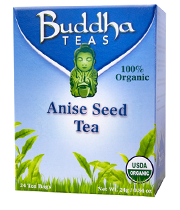 While modern medicine has dramatically changed the health world, people still rely on many of the herbs that have supported and benefited us since ancient times. Anise tea continues to bear such a distinction. Once used by ancient Egyptians, anise has become popular across the globe, and is still consumed by people of all ages in numerous cultures. The refreshing taste of licorice serves to enhance its popularity, and for those who know of it, anise tea offers a variety of health benefits, able to support digestion, promote relaxation and strengthen respiratory health.

Anise tea is known for its relaxing qualities. It helps to ease feelings of tension and anxiety thanks to its many natural constituents, including thymol, stigmaterol, terpineol and eugenol. Its calming effects alongside the soothing properties of warm tea make it an excellent natural remedy to promote long and restorative sleep.

Another of anise tea’s many uses is promoting lactation in new mothers. Its primary constituent, anethole, is a known phytoestrogen, which has an estrogenic effect in the body. Promoting the estrogen activity stimulates and can enhance the production of breast milk.

The estrogenic effect of anethole also has other applications. The anethole in anise tea can also help to support women’s health. It may help women dealing with irregular menstruation to have a healthier cycle, with greater regularity and fewer unpleasant side effects. It may also promote the transition through menopause in older women.

For respiratory illness, anise tea can be highly beneficial. Anise tea is known to have an expectorant effect, which helps to clear the lungs and airways of excess fluid and mucous buildup. This can bring relief to coughing and a sore throat. It may also be used to reduce the effects of asthma thanks to its antispasmodic effect.

Anise tea has a mild diuretic effect, which helps to flush out toxins, waste and infectious agents that have been filtered from the bloodstream by the kidneys. It may also help to clear the digestive tract of toxins and waste as well.

The antiseptic properties of anise tea may be useful for supporting oral health. Anise tea helps to naturally eliminate bacteria in the mouth, reducing the risk of oral infection, and also acts as a natural mouthwash. It can be used to ease the pain of a toothache, and because of its pleasant flavor and aroma, may also be used to freshen breath.

Anise tea has a variety of benefits, and may be used for digestion, respiratory health, lactation and much more.